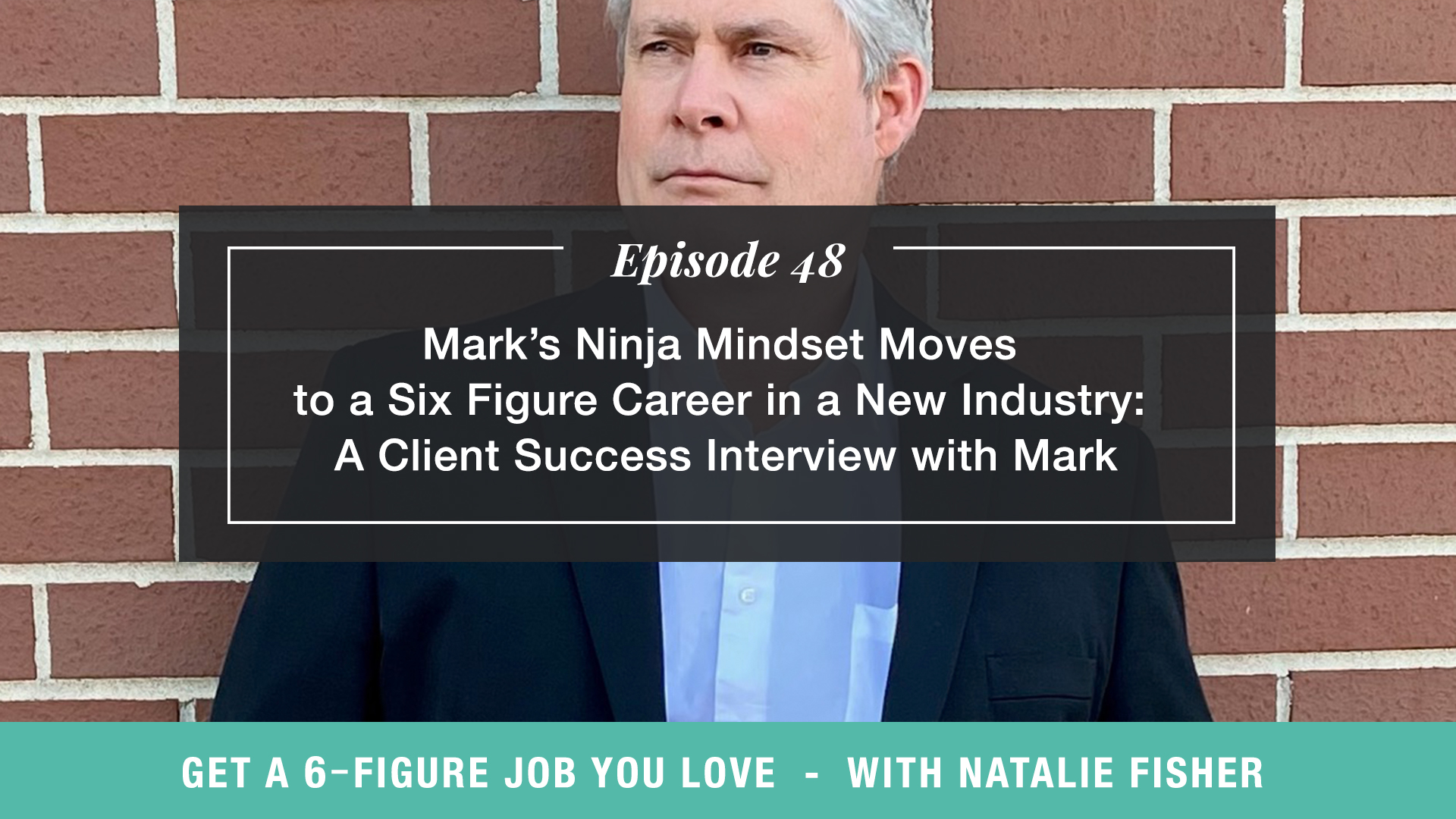 The culture of your workplace has a massive impact on your productivity, stress levels, and your mindset. When you’re in a toxic workplace, you might not even know it until you’re burning out. That’s what happened to my guest today before we started working together and he landed a new role in a new industry.

Mark works for a global healthcare organization that has a big impact on patients who need lifesaving blood transfusions. But getting here took a lot of mindset work and rewiring of his brain. He saw the gaps in his thinking and found me to coach him on filling them.

Join us this week as Mark shares his story of going from a toxic work culture and being laid off to his new role making six figures in a new industry. While he has created a ton of success in his career, he also went through many challenges. We’re discussing how coaching has helped him overcome these challenges, why workplace culture is so important, and how even the most successful leaders need coaches.

If you’re ready to dive deeper into your career mindset and start creating bigger, more impactful results in your career, click here to get started on your path to a six-figure career you love!

Page 4 of 5
But the beautiful thing about this is is that the worst of it? If you already know that’s a possibility, then it’s not a big deal. You can just feel those feelings, you feel some disappointment. Okay, you’re not going to die from it. So you feel those feelings and then you already know you’re going to move on to your next action until the result is achieved. Until your result is achieved, you are not done. So don’t tell yourself that you are. Don’t fall into the trap of going back to learning more information. If there’s a specific piece of information you want to learn, great. But it’s so important that we realize there’s no right way because if there was a right way, then trust me you would know about it and you’d already have your result.
So the behavior that we have is just based in fear, based in not wanting to fail, not wanting to have something not work out, not wanting to be disappointed, not wanting to feel a negative emotion. And by avoiding negative emotions, we don’t move nearly as quickly as we could. And when you get to the point where you realize that the negative emotion is just a part of being a human being, then you’re not afraid of it anymore and you can even like it.
So I sometimes feel anxiety and I don’t have a problem with it anymore. So I’ll literally just sit on my couch and I’ll feel the anxiety in my body and I’ll do this exercise of processing the feeling. It’s called processing the feeling. You just bring yourself into your body. You just feel the anxiety. And then the next day I feel great. I feel inspired, ready to go. And then yes, in the future, I know that I might feel anxiety again or I might feel disappointment again. I might feel lazy. I might have a feeling that I don’t love, but that’s how it works. We’re going to have these feelings.
And think about this. If we didn’t have the range of feelings and we were just feeling happy all the time, then how would we ever know what happy even is? We wouldn’t know, right? We’d just be like, “Oh, everything’s always happy.” And if that’s the way that it was meant to be, then it would be like that. But since we’re humans, we have the privilege of experiencing the full spectrum of emotion. And if we just think of it as a roller coaster, then we just expect it, right? We can just expect these feelings to come. We can just expect that at some point we might feel some anxiety, we might feel some disappointment, but it won’t stop us from taking action because we have the end result in mind.
So as long as we understand that until we get the result we want we’re not done, then we don’t have anything to be afraid of on the way because we have the certainty in ourselves that we’re not going to give up on getting that result. And the reason why most people give up is not because they can’t achieve their dream role, it’s because they underestimate what it takes to get it. They underestimate what it takes in terms of massive action and the myriad of emotions that they’re going to feel on the way there. And a lot of people quit before they get there because they underestimated that that’s what it was going to take. And somewhere along the way, they either have the stop-start cycle or they decide they’re not cut out for it, or they keep changing their mind and they never end up succeeding at any one thing. And it’s a pity because it’s not because they can’t, it’s just because they didn’t understand the process.
So the results are created through the self-correcting process that I talked about on this podcast. That is how you figure out the right way for you. And I have followed a ton of programs with a ton of steps and they can be helpful, but I’m always going to have to tweak it to work for me. I’m always going to have to take the responsibility of how I’m thinking about it, what I’m feeling, and how I’m executing the actual steps. And maybe I tweak the steps. Maybe I change them. Because if it’s not working, then it’s my responsibility to figure out why it’s not working, get curious and try again.
The mistake that a lot of people make is they say, “Well, your process isn’t working.” They might buy a program and be like, “Well, I want my money back. That didn’t work.” And yeah, they normally don’t want their money back. They want the result, right? And the reason was not the process, it was that they didn’t make the process work. And I’ve been there. So again, no judgment. But it’s a self-correcting
This transcript was exported on Jun 07, 2021 – view latest version here.

Page 5 of 5
process because if it wasn’t, how do you explain it working for some people and not for others? Because the people it works for, they know how to make it work for them. The people it doesn’t work for, they think it’s the responsibility of the process to get them their result. And it’s always our responsibility. And that’s a beautiful thing because we always have control over everything that we create.
So I hope that answers your question about what’s the right way? I’m confused. I don’t know what to do. I don’t know what the right answer is. I don’t know what the right thing is. So I’m not going to do anything. Just ask yourself, where does that leave you in the end? It doesn’t serve you. So you can get mad at the people who make the processes all you want, but at the end, you’re left sitting there without the result that you wanted. Thanks for listening my friends. I will talk to you next week. Bye.
Thanks for listening to this episode of Get a 6-Figure Job You Love Podcast. If you’re ready to dive deeper into your career mindset and start creating bigger, more impactful results in your career, join me at www.nataliefisher.ca/getstarted. I’ll see you over there.